and the flow of tree trunks

Forestry has always been an important activity in Norway. Especially in the time when wood was in demand in industry and for house and boat construction on the mainland. Large forest areas along rivers and streams allowed large quantities of timber to be exported.

In Tinn, too, forestry was one of the biggest sources of income and many men worked as lumberjacks in winter. As long as snow lay, they took the tree trunks out of the woods and then flowed the rivers down with the spring flood.

Already in the times of the Vikings tree trunks were broken, but invention of the gate saws from about 1530 began a new time.

All tree trunks, after Skien, had to be a town on the coast of southern Norway. In the beginning, every forest owner was responsible for the rafting of his tree trunks to Skien. After the citizenship of Skien got the monopoly on the purchase, processing and sale of tree trunks, the first rafting association in Telemark was founded in 1664.

For hundreds of years, the owners of Grimsøy monastery had the monopoly on the purchase of all the tree trunks from Tinn and Hovin. In 1801, the Cappelen family bought most of these rights and at the end owned 2/3 of the forest in Tinn and Hovin. Part of this property was also you Sandviken Bay in Hovin. After Didrik Cappelen sold a large part of his forests, he moved there with his family in 1895. In 1904 all remaining owners were sold in Tinn and Hovin and the family moved away.

After the great depression in 1886, the family had to sell a large part of the forest to the state. The rafting rights were transferred to a rafting company from Skien in 1887. In addition to forestry, Cappelen also operated rafting and led to major improvements in the Raua and Skirva rivers.

Rauadamm was one of the buildings commissioned by the Cappelen family. It was built by Swedish architect Jonas Erikson in 1883. The dam is 100 m long and the crown of the wall is 3 m wide. The dam was built with very precisely hewn stone, so that a mortar joint does not

it was necessary. The dam is considered a masterpiece of its time, especially considering the available tools at the end of the 18th century. The dam was restored in 1994-95.

In 1900, 36,000 tribes were blown down the Raua. For this work, 10 men were always necessary to drip the tree trunks through the Raua dam and further down to Tinnsjö. It was busy days and nights for the men until all the wooden catches were laid in front of the dams, the gutters/tunnels and below at the mouths in the Tinnsjø. Everything was dependent on the water level and the weather on the Tinnsjø, when the collected tree trunks were to be instilled further southward as far as Tinnoset.

The most difficult point for kicking on the Raua was always the 43 m high waterfall. Attempting to blast a gutter into the waterfall has not had any relief for kicking. Therefore, the first wooden trough was built in 1810 for the transport of tree trunks over the waterfall. The maintenance of the gutter was a very costly matter and so the construction of a tunnel was decided in 1925. The “Rautunnel” is 60 m long, has a diameter of 2.2 m and a slope of 26 %. The inlet trough is 31 m, the run-out channel is 11 m long. The sides of the gutters are built as dry walls and the floor is a concrete layer cast on pebbles. Construction began in February 1926 and the first tree trunks were flown down the river through the tunnel in May 1929.

In the 1960s it happened once that the tree trunks were wedged in the tunnel and the whole tunnel was clogged. It took several days to get the tunnel free again. Fortunately, no worker was injured in this dangerous work.

In 1968, the last tree trunks were broken on the Raua. 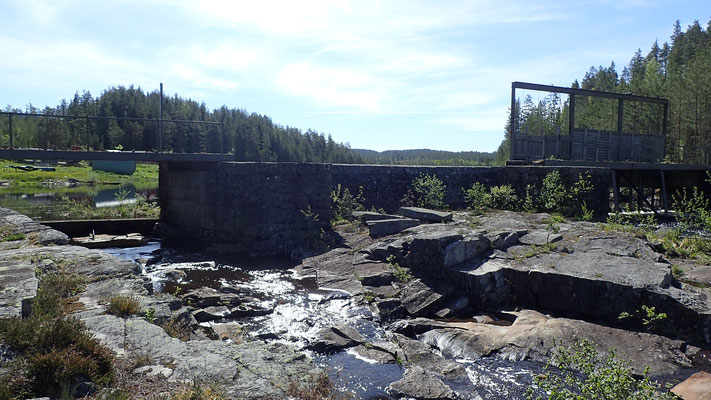 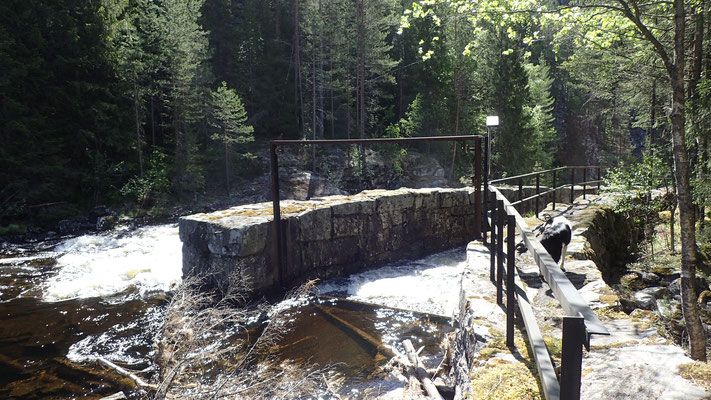 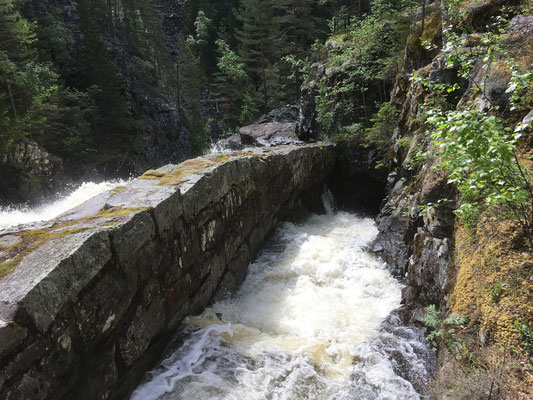