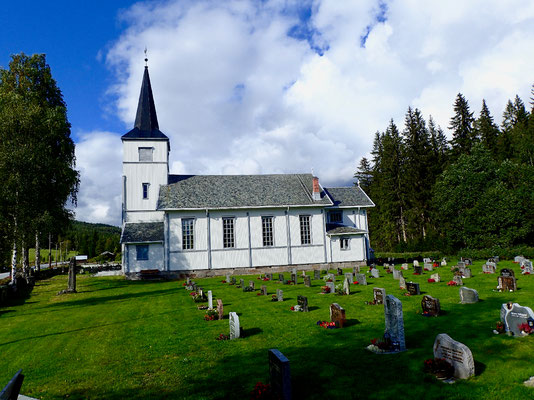 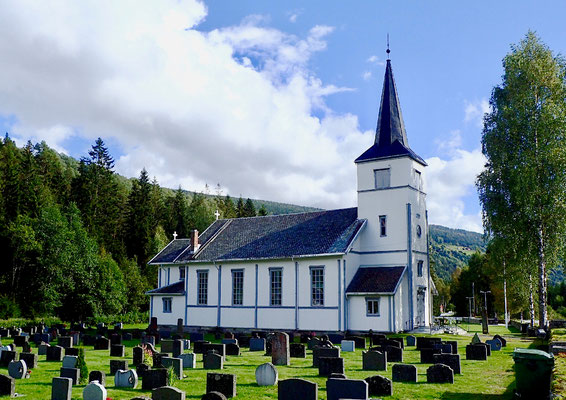 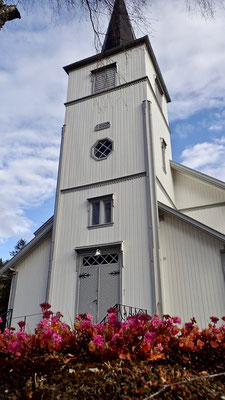 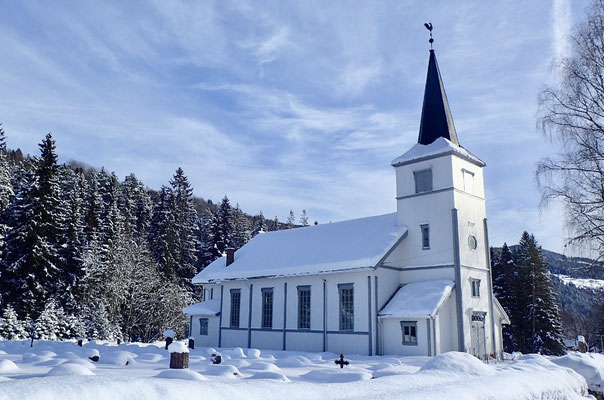 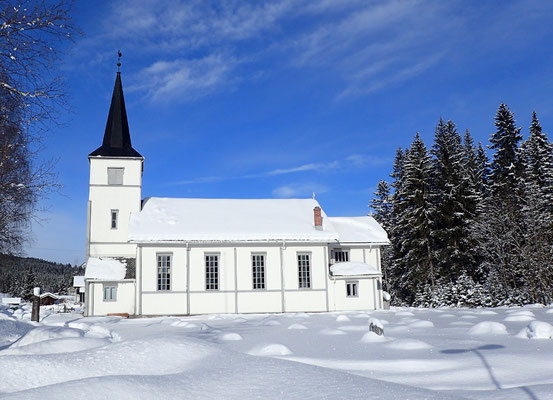 Austbygde became a parish of its own only on 1 January 1888 and was formerly part of the parish of Atrå. At the same time, Austbygde also had its own church. It was designed by Jacob Wilhelm Nordan and built by architect Gulbrand Johnsen of Nes in Romerike, who built several churches in Buskerud and Telemark in addition to church in his home district. The church was consecrated on 23 November 1888. It is a wooden long church with 300 seats. The church has a west tower, which is surrounded by an annex dating from the 1980s, with a baptismal sacristy and toilet room. 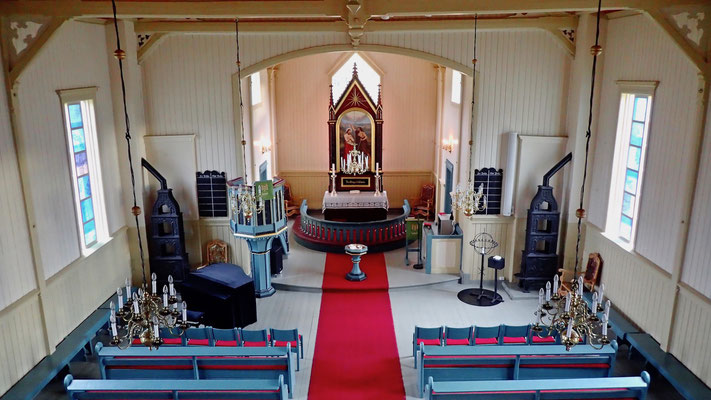 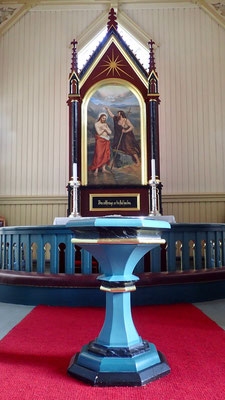 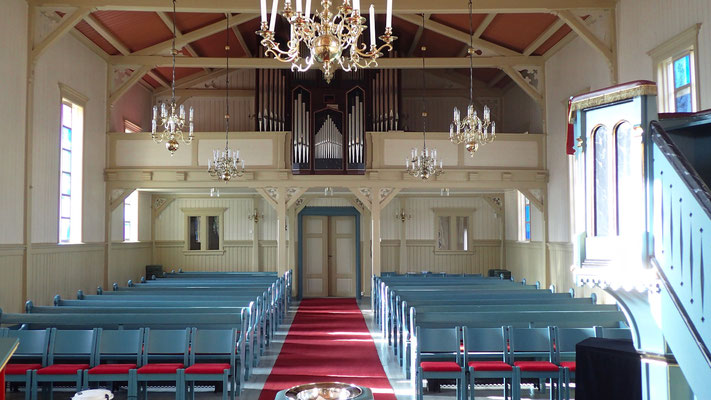 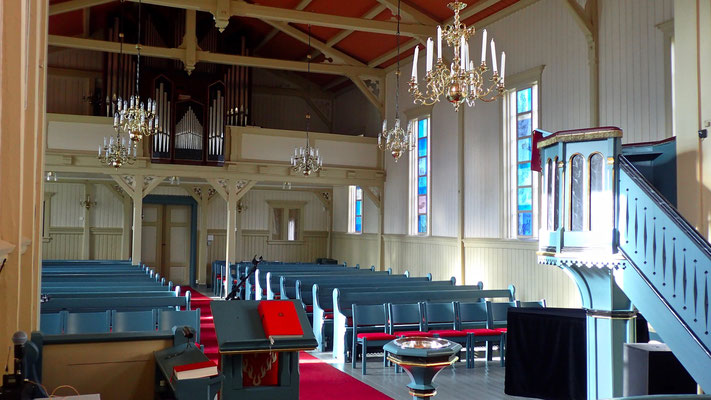 The right-hand choir in the east is surrounded by sacristy (of which the one that used to be a baptistery was now used as a storage room) The church was renovated in 1933-34 according to plans by Domenico Erdmann. It was painted by Øystein Orekås. On the occasion of the 100th anniversary, the church was again extensively renovated in 1985-88.

The choir is a step up from the nave and the church has an organ gallery to the west.

The altarpiece was painted in 1909 by Lars Osa after the painting of Adolph Tidemand’s “Jesus Baptism” in the Trefoldighetskirken in Oslo. Before this time there was a wooden cross on a green background with frame painted from Nordan at this point.

The sermon chair was carpentered by the master builder. He stands on the left side of the choir. There is also a simple reading desk. The baptismal font is similar to the sermon chair at the same age as the church.

The first organ of the church was originally a harmonium from 1915. In 1938 it was exchanged for a three-part Walcker organ. After the war, the church received an electric heating system. This caused dry air in the church, and the organ began to fail. The current organ is from 1973 and was built by Paul Ott. It has 15 votes (2 keyboards and 2 pedals). The harmonium is now in the local prayer house, while the Walcker organ is now used in the Baptist Church of Rjukan. 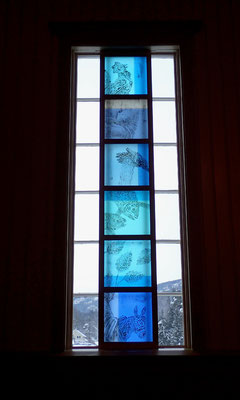 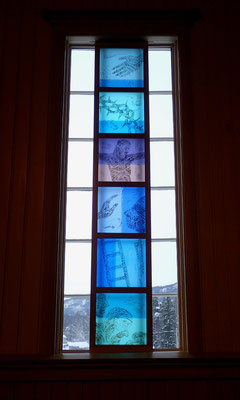 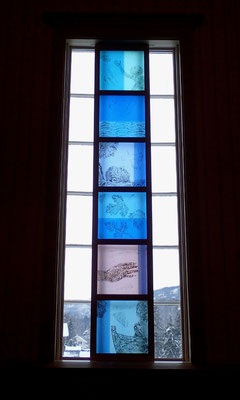 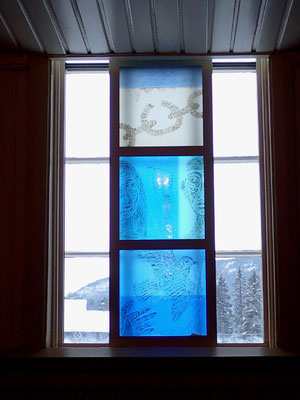 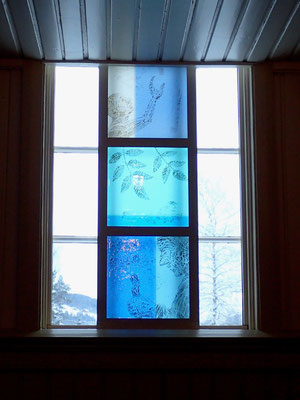 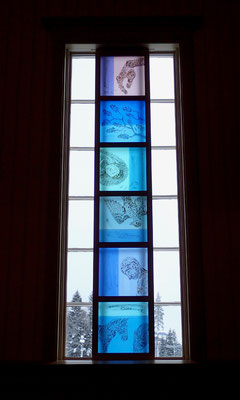 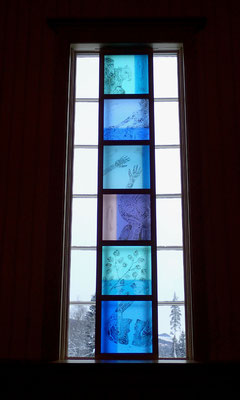 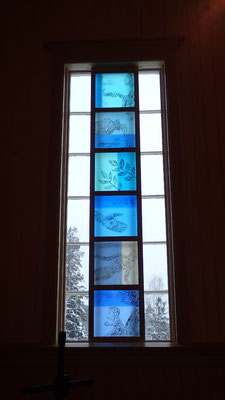 In 2004, the Austbygde Church was given an inheritance. The couple Kjersti og Andres Flatin wrote in their will:

“The money should be disbursed by the church wheel in consultation with the "Riksantikvaren" and used for the decoration of the church, but not for normal repairs.

This money was used for the purchase of a wing with stool, a loudspeaker system, “Candle Globe”, new gold leaf for the altar, sermon chair and baptismal font, as well as for the new stained glass by the artist Tor Lindrupsen.

After completing his work, he himself wrote: “I tried to bring the glass into the room in which I recorded the formats and colors that were already present in the church, but not that it looks like it is already a hundred years old. The expression of the windows thus fits the old church and at the same time it is clear that it was only created today.”

The motives come from the history of the Bible. Some are very easily recognizable, while others are only hinted at. Teachings and symbols are immutable in their form, while history is more open in itself. It should be read and interpreted constantly. Therefore, he does not make any more detailed information on the depicted history in order to allow space to continue writing the story. Some of the motifs can only be seen from above from the gallery, there is also a field without a motif. This field is pure glass with the air bubbles created in the merging of the different colors. With this field, the artist leaves room for all the stories that no one knows and which have not yet been written.

How were these artworks created? The glass was cut, the motifs were recorded with glass powder and then both were fused at 760 degrees, then the glass fields were framed. 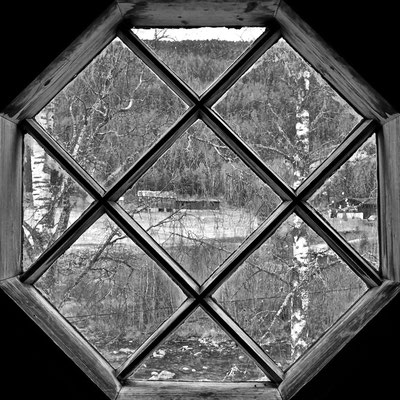 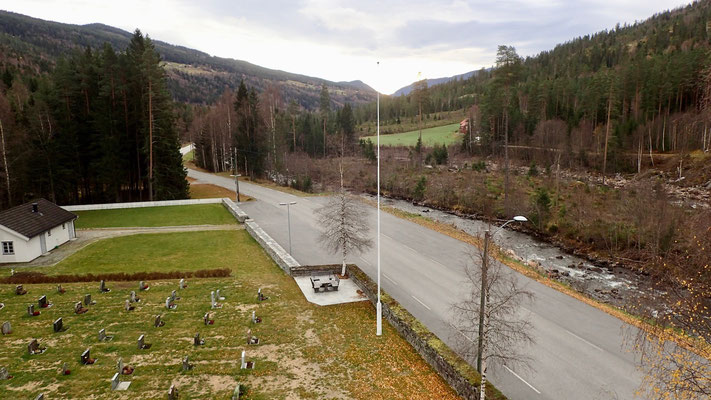 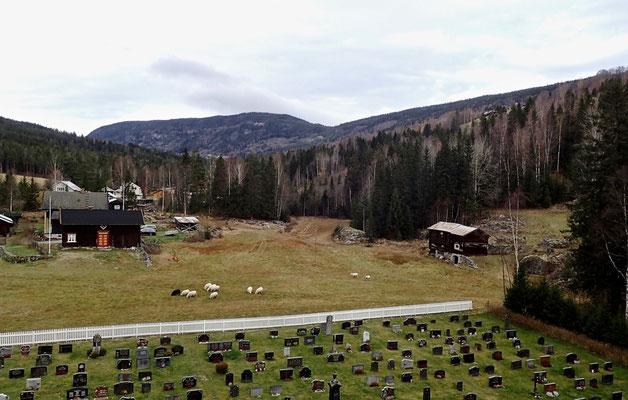 At the beginning, the cemetery was built only north of the church and was later expanded. Southeast of the church is a construction house, which was built in 1982 after a lengthy process and several redrawings.

In the cemetery there is also a memorial stone from 1938, in memory of the one who ensured that the church could be built and with a plaque for the one who made the church property available at the time.

View from the church tower towards Austbygde and further up to the valley to Tessungdalen. 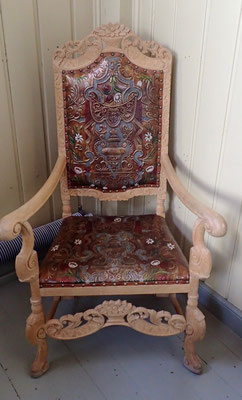 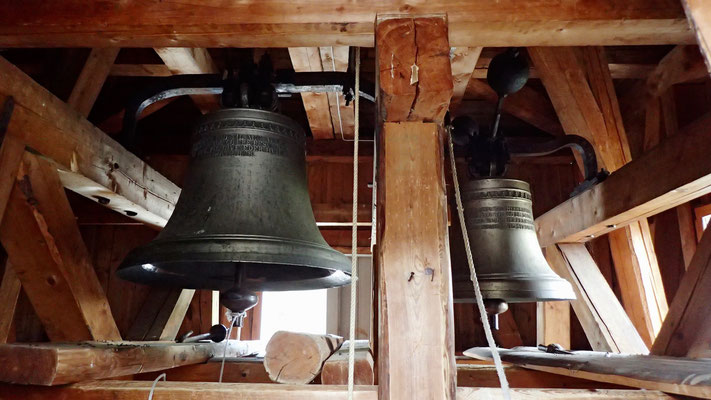 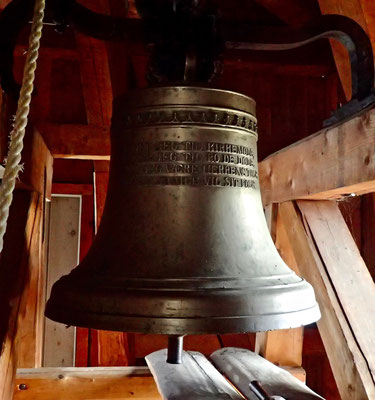 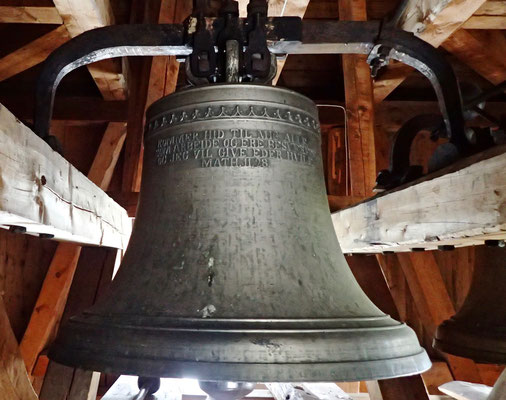 The bell founder Olsen Nauen supplied the bell for the newly built church in 1888. Two identical (300 kg) bells were ordered. On the way, one of the bells was lost she fell into the lake. There was no time to pour a new bell, whereupon a bell weighing about 200 kg was delivered. The two bells should be ringed in such a way that the small receives 2 blows while the big one gets a blow. That alone is an art in itself.

The small bell got the name “Moses” because it was pulled out of the water in a sense – they also see the stories about Moses from the 2nd century. Book of Moses, 2 chapters.

On the big bell it is written:

Come to me, all you who are laborious and burdened; I will refresh you Matt 11,28

On the smaller one:

I call to worship

I call to rest and death

shall I be God’s mouthpiece

that he would gather his people.