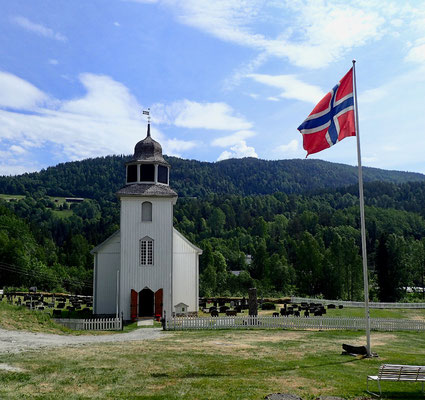 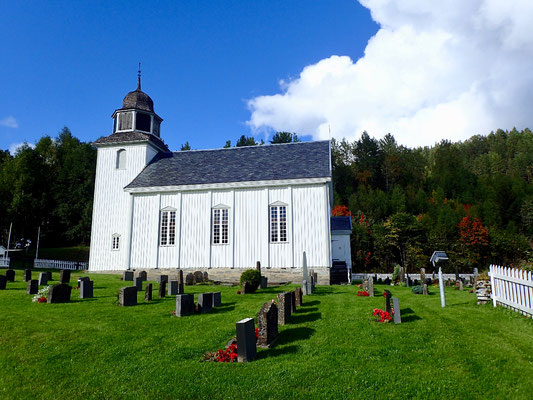 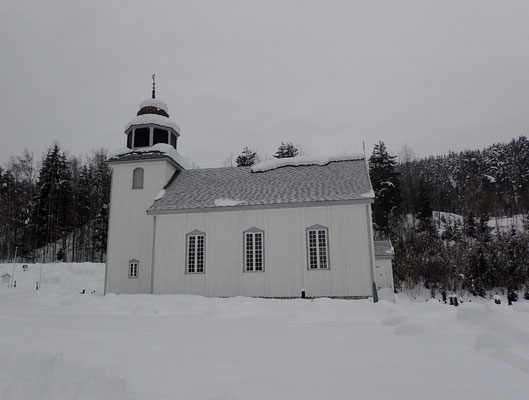 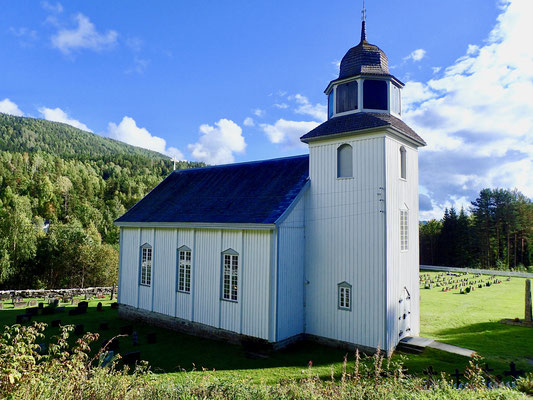 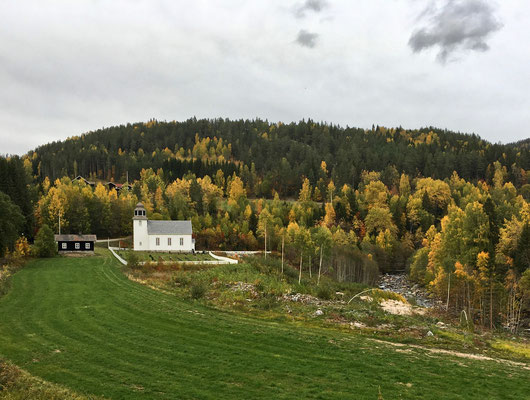 The Hovin Church is a log house langchurch, built in 1850 by master builder H.A.Olsen of Kongsberg, based on a drawing by castle architect Linstrow.

The old stories speak of a church square on the heights between Bakka and Hove in Hovin. When the first church down in Jørisdal was built is unknown. In any case, there was a church there before the present church was built, because in 1730 Joachim Schweder wrote that the church was in good condition and was only recently renovated. In a meeting on 16 December 1844, however, it was decided to build a new church and demolish the old one. The population had increased and the desire for a larger and more expedient church grew.

The new church was to be realised according to Hans Ditlev Frants Linstow’s model drawings for the church building. In 1843, a year earlier, a new church was built in Gransherad. It was agreed to use the same pattern drawing and to appoint the same builder as in Gransherad Halvor Andreas Olsen frå Kongsberg with the construction of the church. On 29 October 1846 an offer was accepted by the master builder. .. For this reason, the two churches in Hovin and Gransherad are almost identical today.

The bricklayers and woodwork for the church cost 800 Speciedals at that time.

The old churches of Hovin and Gransherad were preserved until the new churches were completed.

In a letter dated 3 June of the same year, the military command announced that at the consecration ceremony, the presence of the military was necessary to ensure order and peace. They came with 2 non-commissioned officers and 25 men. The pastors of Seljord, Tinn, Sauherad, Lårdal, Hjartdal and Heddal came further.

The church of Hovin is a long church built in block construction with room for 250 men. Above the entrance to the “våpenhuset” (weapons room – so the entrance area of a church is called because the visitors had to lay their weapons here) is written

Most of the inventory was handed over to the church as a gift in the years, including the baptismal pool, the bridal chairs, the chandelier and the organ.

A stone to commemorate the soldier Olaf Ellefsen, who had fallen for his fatherland during World War II, was erected in the cemetery and unveiled on 11 August 1946.

On the church plot are three buildings, which together create a beautiful courtyard. This is the church hall, an old stable and the building house. 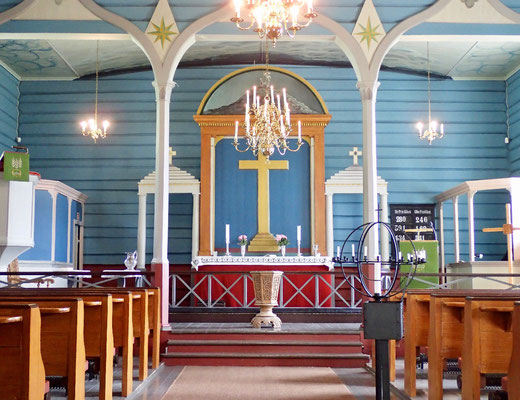 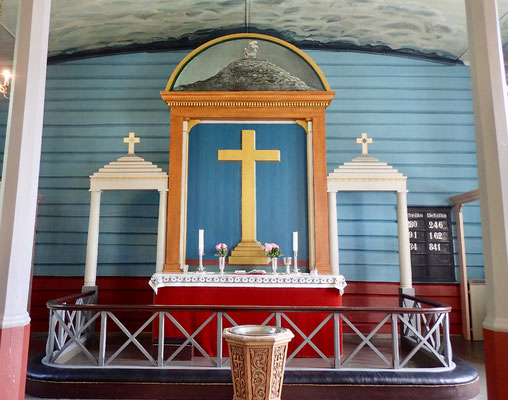 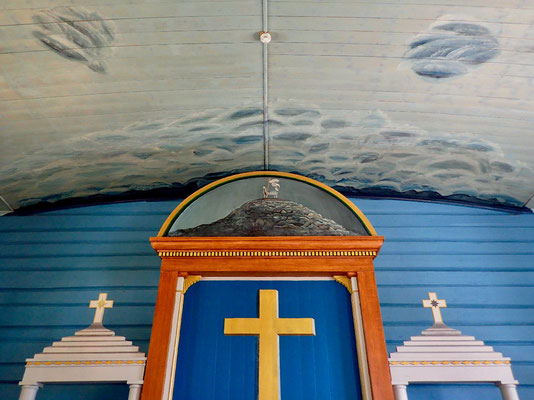 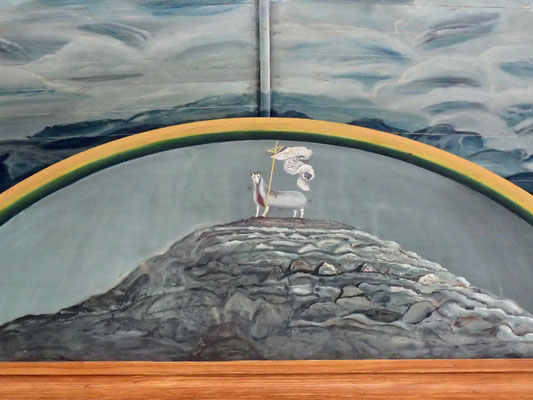 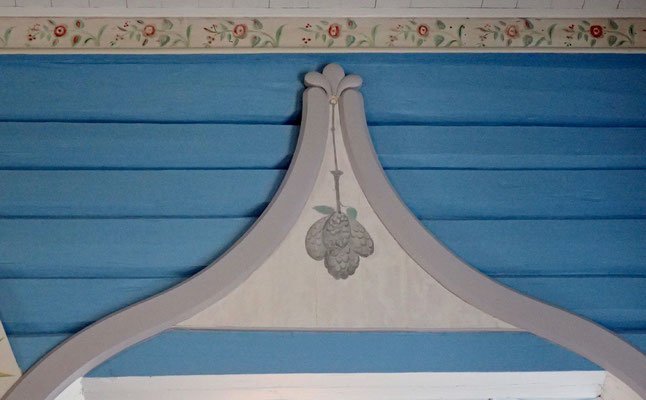 The altar, in the main area the yellow cross on a blue background, above it the lamb with flag (the victorious Christ) standing on the top of a mountain. On each side of the altar there is a portal as access to the altar. 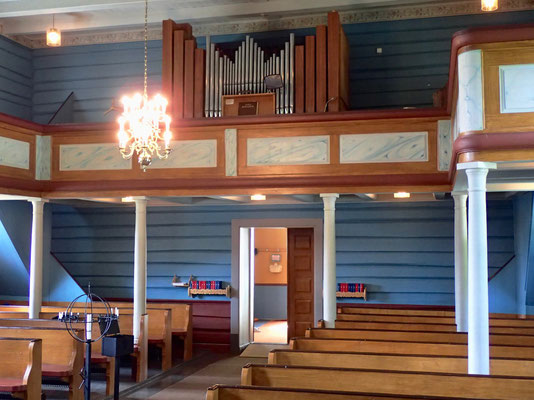 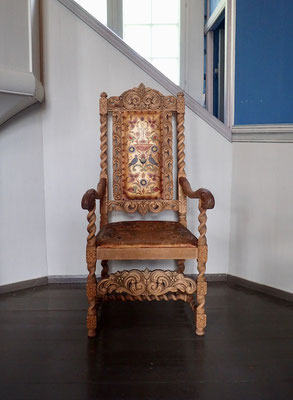 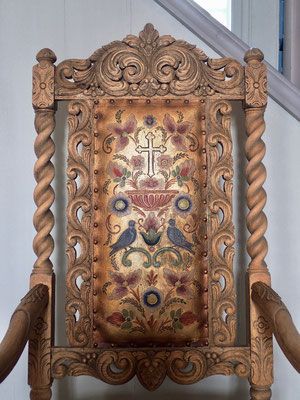 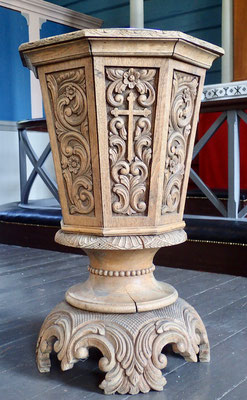 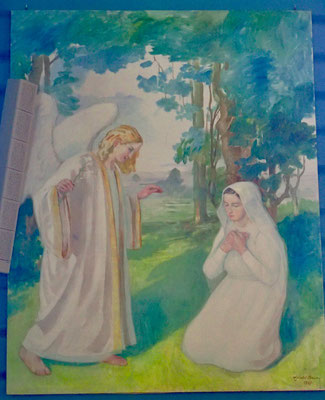 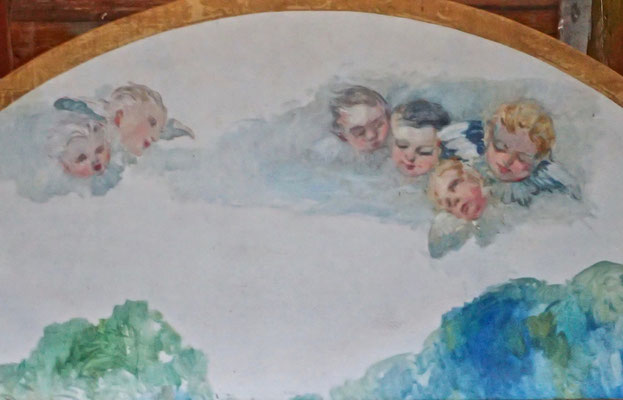 The organ comes from the J.H.Jørgensen organ factory and was built there in 1970. It has 8 votes distributed over 2 keyboards and pedals.

The baptismal font is made of carved oak and was made by Søren Nedrebø in 1950. He also carved the bridal chairs.

The painting dates back to 1921 and was painted by Harald Brun.

A song about the Hovin Church

It’s a little hard to translate, but it says something like this.

In our village there is a church, on the bank of the river, its tower towering up to God and eternal rest.

There stands our old church house very high, but in a valley with quiet river noise we find the church.

The bell reverberation of our stronghold climbs up into the blue sky, it sings in joy and sorrow when the bells are beaten.

All the churches in North and South are good for our soul, there we come to God and can heal our wounds

Now you are 150 years old, you stand in shape and stone, you shine white and clear for us and you are a home for us.

Grave monument for a deceased, e.g. on a church wall

Torkel Olevsøn is my name

My happiness is in God’s hand

Terkel Olevsøn at his own expense

Measuring garment from the

It was found in the church during the renovation work in 1974.