Why it is worthwhile to spend a few days of holiday in Rjukan after the pilgrimage, we would like to tell you on this page. More information about Rjukan can be found on the website of Visit Rjukan

Rjukan was already known as a tourist region in the 19th century due to its 104 m high waterfall. Since the beginning of the 20th century, the waterfall has been diverted into pipes for power generation, which Norsk Hydro in Rjukan needed for the self-developed Birkeland-Eyde process to produce mineral fertilisers – the first company in the world! This led not only to the modern industrial revolution in Norway. The artificial fertiliser also revolutionised global food production and laid the foundation for Norway’s path from one of the poorest to one of the richest countries in Europe. Rjukan is Norway’s first city designed by an architect and was built by Norsk Hydro in record time. Industrimagnat Sam Eyde laid the foundation stone and wanted to create an aesthetic model society. In order to bring workers to Rjukan, he also built at the highest technical level. In 2015, the industrial region of Rjukan-Notodden was declared a World Heritage Site by the UNESCO Commission. As such, places of outstanding importance to humanity are listed, which are to be preserved.

The Vemork hydroelectric power plant at the Rjukanfossen waterfall was completed in the autumn of 1911 and was at that time the largest power plant in the world. It became the site of one of the most important sabotage missions in the 2nd century. World War, when Norwegian saboteurs prevented the Nazis from developing the heavy water needed to produce the atomic bomb. In the old premises is the Norwegian Industrial Workers Museum, where you can learn about Norwegian industrial and war history. The path used by the resistance fighters for the sabotage action is today a marked hiking trail and is also offered as a guided tour.

For more informations about the power plant Visit Rjukan 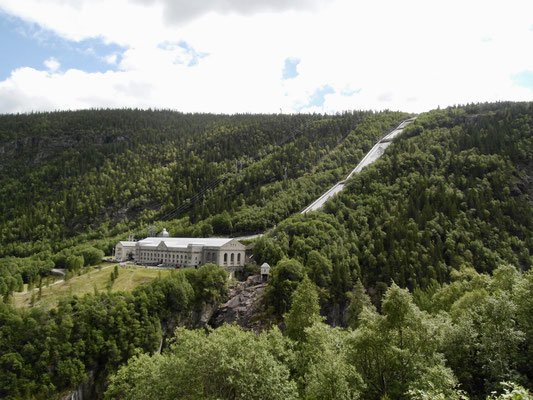 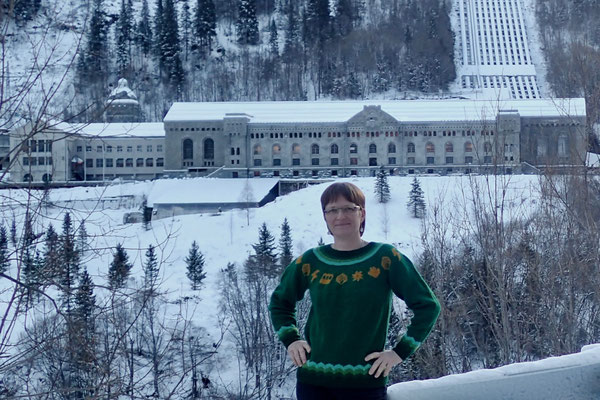 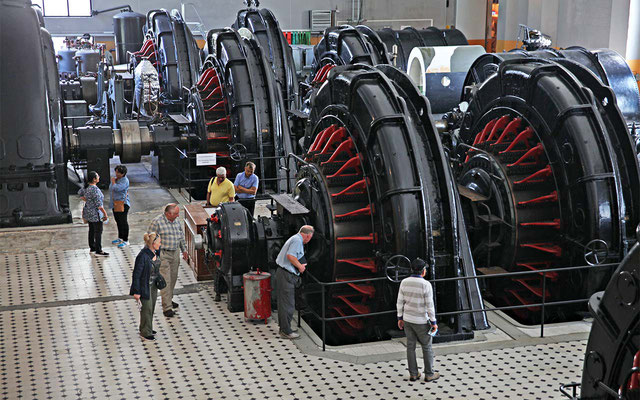 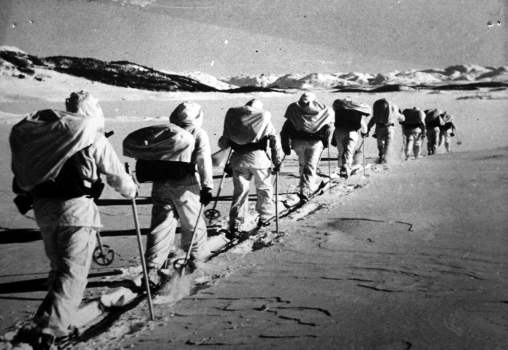 The railway ferry M/F Storegut once transported train wagons with artificial fertiliser from Rjukan to Tinnoset, so that it could enter the world market from Notodden. The M/F Storegut is now a protected object and is on the UNESCO World Heritage List as part of the Rjukan-Notodden Industrial Heritage Site.

Today it runs during the summer months on certain dates between Mæl and Tinnoset and can also be used in conjunction with the museum railway for a day trip.

The Rjukanbanen was a semi-public network opened in 1909 and was built with high state subsidies. The railway line runs from Rjukan (with a side line from Vemork) to Mæl, where the railway connection connects with, for example, the M/F Storegut to Tinnoset. There it was connected to the network of the Norwegian State Railways. Until its dismantling in 1991, the side line from Rjukan to Vemork was used exclusively by freight wagons. Shortly after the opening of the railway, their electrification was decided. From 30.11.1911 the railway then operated electrically. It was the first electric standard gauge railway in Norway and sets the standard for later electrification in Europe.

The main task of the railway line was to transport the goods of the chemical plant belonging to the power plant, which mainly produced artificial fertilisers.

In addition, the line also served passenger services and in 1930 there was a sleeping car connection to Oslo. Passenger services were discontinued in 1970 after the new road was opened along the Tinnsjø between Mæl and Gransherad.

The railway also belongs to the UNESCO World Heritage Site and the museum railway has been operating again in the summer months since 2016. Information on timetables and

The Krossobahn (“Krossobanen”) is Northern Europe’s oldest cable car and takes you in five minutes from Rjukan to the foot of Hardangervidda. You can take both bikes and skis up with the Krosso cable car – to name just two examples of nature experiences on the Hardangervidda. The railway was built in 1928 as a gift from Norsk Hydro so that the inhabitants of Rjukan could see the sun during the winter months. Today, the Krossobahn is a tourist attraction that is open all year round. 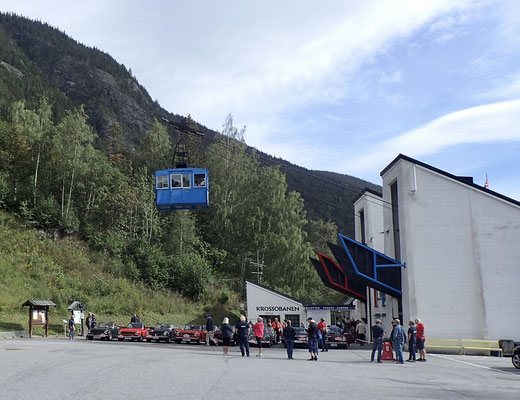 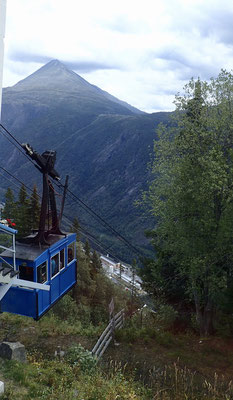 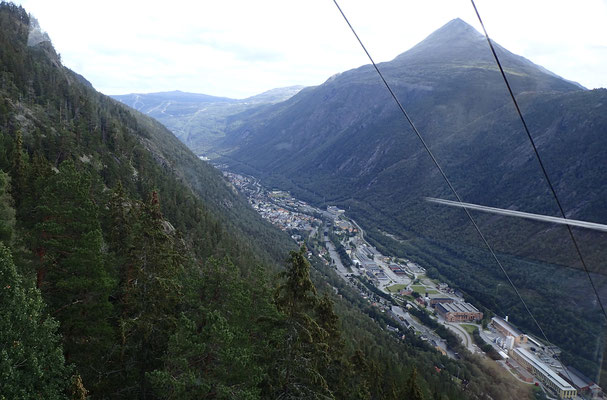 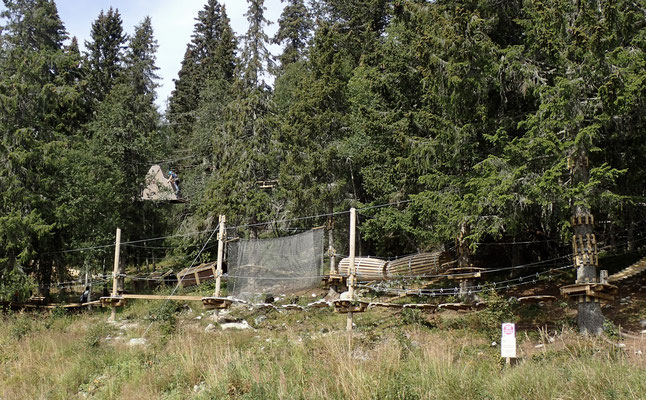 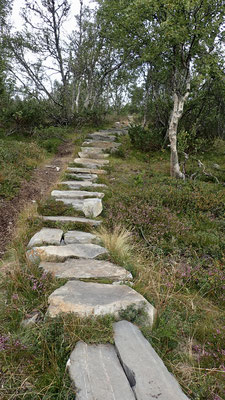 The Gaustatoppen, which is described by many as the most beautiful mountain in Norway, rises 1883 m asl high above Rjukan into the sky. It is climbed annually by about 30,000 hikers who enjoy the fantastic view from its summit. In far view you can see east to the Swedish border and south to the coast. The panorama covers one sixth of Norway.

Regardless of the weather, coffee, waffles and smaller dishes can be served in the over 100 year old stone hut of the hiking association. In the hut you can also have a stone stamped by yourself, as proof that you have climbed the Gaustatoppen. The best starting point for this hike is Stavsro, which is located at 1173 m asl. Here is a large parking lot with kiosk and toilets. The path is well marked with red Ts, and most take two hours to reach the summit and a little shorter time for the descent. On the way you can find stones with prints of sea waves. These stones date from a time when the sea reached up here, where today is high mountains. You can find more information and impressive pictures here

With the Gaustabans you come comfortably up the mountain. The track leads in two stages (technically separated but organizationally inseparable) in the mountain. At an altitude of 1170 m, you first take a tram-like tram 850 m horizontally into the mountain, then one climbs in the mountain to a funicular that brings you up to a total of 650 m over a length of 1050 m. Exit is then 80 m below the mountain hut at the end of a tunnel.

The idea for the railway was developed in 1953 to develop the Gaustatoppen touristic. This idea, however, was quickly adopted by the army and intelligence services during the Cold War, which built the railway in 1959. It was not until 2008 that an agreement with the Norwegian Armed Forces was concluded and the railway opened in 2010 after extensive renovation work for public transport. The train is not open all year round. Further information can be found on the homepage of  "Gaustabanen" .

100 years after Oscar Kittelsen and Sam Eyde presented the idea of the sun mirror, the idea was actually realised. Rjukan lies in an east/western valley. The mighty Gaustatoppen and the steep rocks south of Rjukan ensure that Rjukan is sunless from October to March. The return of the sun to the centre of the city is celebrated every year with a big festival.

In 1913, accountant Oscar Kittelsen introduced the idea of the sun mirror and Sam Eyde (the builder of Norsk Hydro and Rjukan) took it back a month later. He also wanted to give the inhabitants the sunlight in winter. Unfortunately, he did not have the technical possibilities at that time and so this idea could not be realised at that time. He had the Krossobans built in 1928 to give the inhabitants the opportunity to get into the sun in winter.

In 2008, Martin Andersen took up the idea again and the municipality of Tinn finally built the sun mirror in 2013. The mirror today sends the sun rays to the center of the market square in front of the tourist information centre. It is fascinating to put yourself in the sunlight in winter, but not to be able to feel their warmth. But also in summer you can see the mirrors glowing in the sun 450 m above Rjukan. The 3 mirror elements are automatically controlled to follow the sun and reflect their rays on the marketplace.