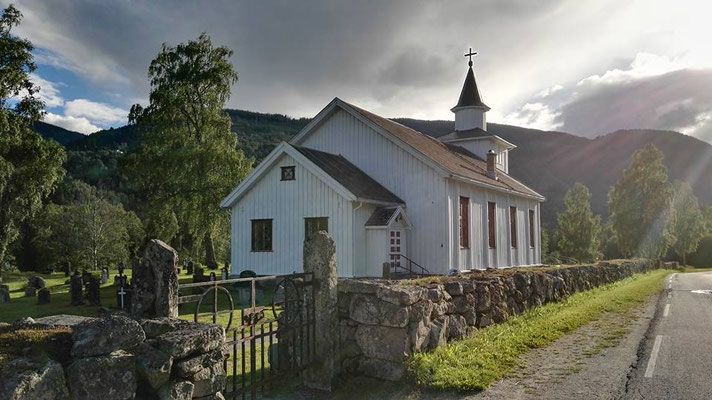 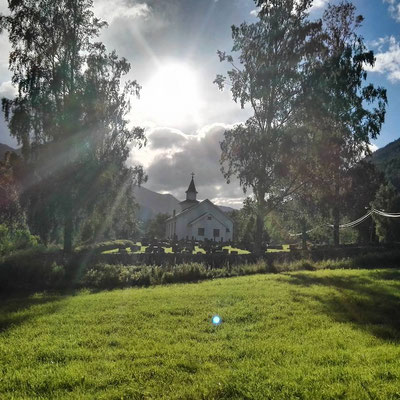 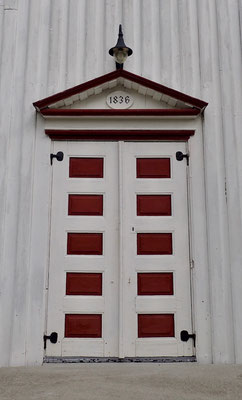 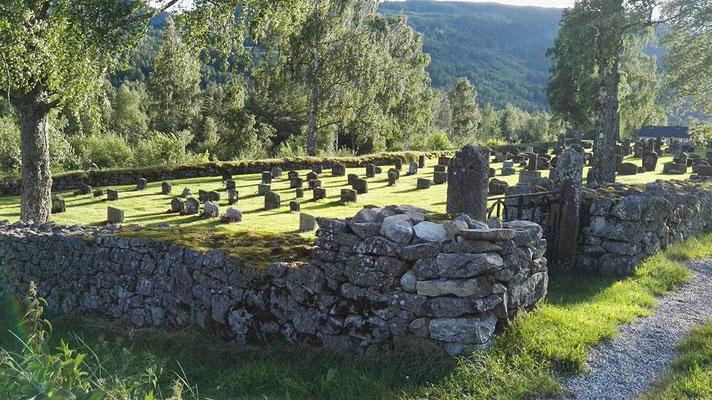 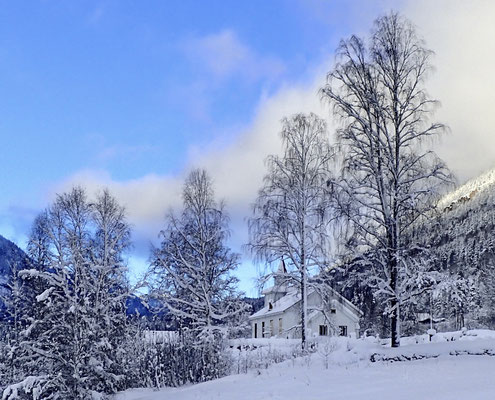 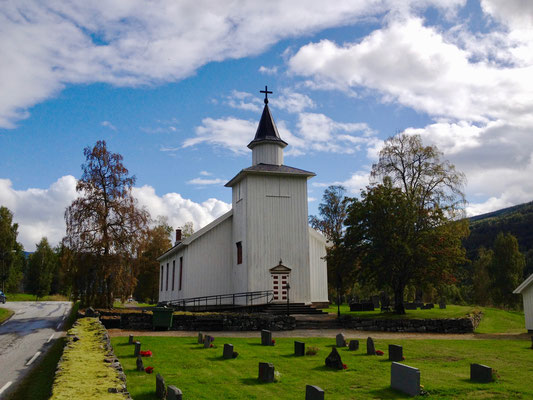 The site of the church in Atrå, north of Tinnsjø, dates back to the Middle Ages. The present church replaced a stave church from the 11st century. A photo of the portal of the old church is located in the “Universitets oldsakssamling” of the Museum of Cultural History, see photo on the right. The museum also houses beams with runic inscriptions of this stave church. In the late 18th century, the stave church became too small and was also in poor condition. For this reason, permission was requested in 1825 to replace the church with a Norwegian choir church. Since this permission was not granted, the sample drawings of Linstow, which were delivered somewhat late in 1827, were waited for. These drawings showed a long church in Empire style built in block construction, but the building committee and the pastor were not satisfied with this. They believed that the church would be too small and that the windows would weaken the construction. In addition, Tinn lacked the experience to establish the beam connection. In addition, the present wooden structure was still unknown at that time, so that the tower was built in block construction. The process was delayed, Linstrow corrected his drawings, which, together with other church drawings, finally appeared as a book. In Atrå one could recruit Christians Aslachsen Rustan (eller Rugstad) og Christen Andersen Stensaas fra Skien as builder. The church was built in 1833-34 and consecrated on 4 September 1836.

So we're talking about a long church built in block building style. It has a west tower, a rectangular nave and a church choir on the east side. The number of seats is given as 300. Over time, there have been some changes. In 1895, the aisle was removed behind the altar. In 1908, under the direction of Halvor Børve, the interior design and furnishings were greatly altered. The side gallery was removed, the ceiling was covered with jute fabric and divided into fields, the gallery parapet was given strips, which also divided it into fields. In addition, the church received new benches and an altarpiece, where a cross was previously used. 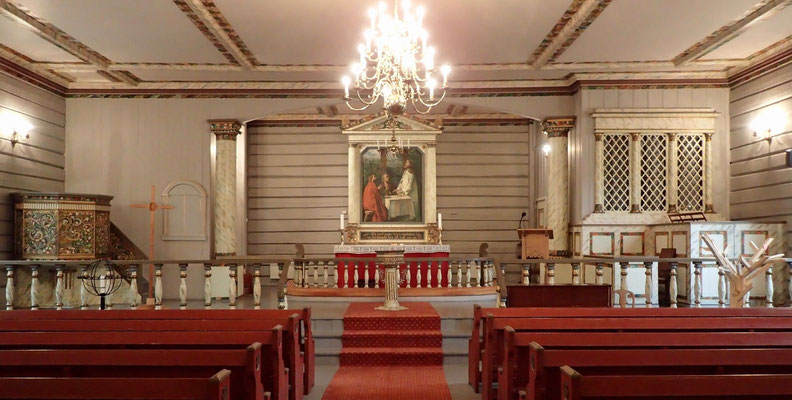 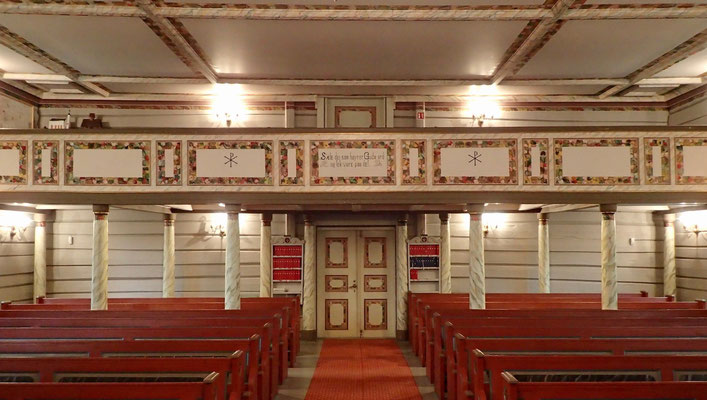 The altarpiece from 1908 depicts a scene from the meal of the disciples of Emmaus (Luke 24) by Lars Osa, modelled on the altarpiece by Eilif Peterssens in the cathedral church of Kristiansand. The pulpit was originally in Empire style, but it was also painted with “Rosemaling” in the 1950s.

There is also a pulpit and other items from the old stave church in the sacristy. The baptismal font is from the year of construction of the church. In the church there is a Jørgensen organ. 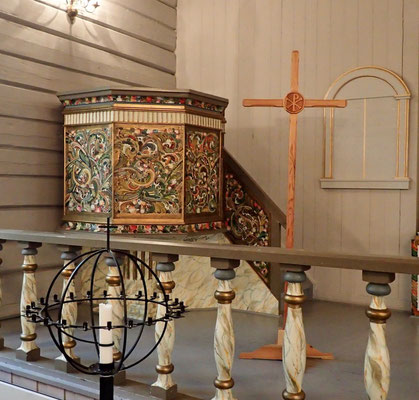 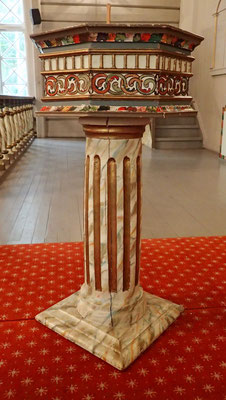 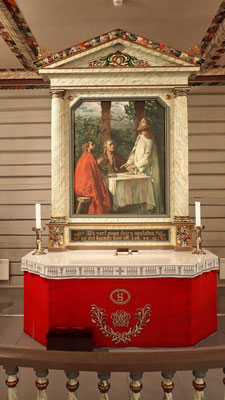 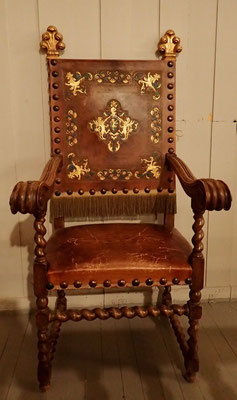 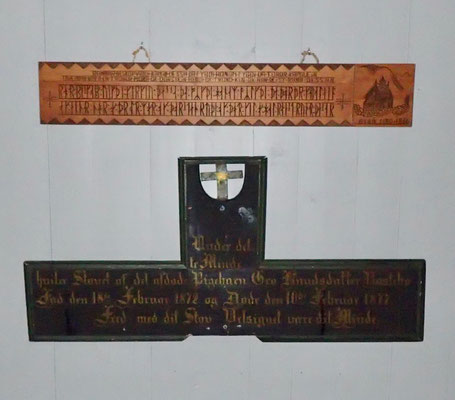 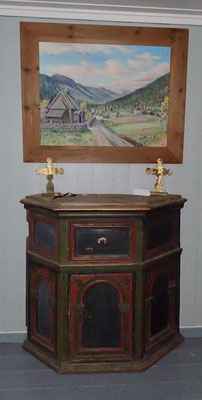 In 1922-24 the church received a sacristy building in extension of the choir and the former sacristy on the south side of the choir became an organ house. Another round of renovations took place between 1951 and 52 when the pulpit of Øystein Orekås was painted with “Rosemaling” (allegedly with the approval of the Office of Monument Plough). The church is shaped in form and shape by the Empire style and at the same time by the rose painting typical of Telemark. A combination that is perceived by most today as very dressy. 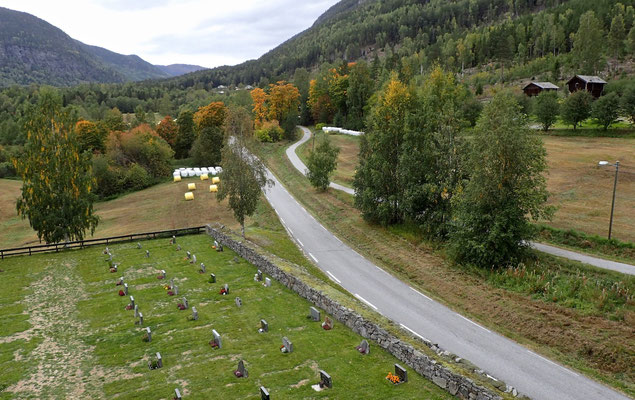 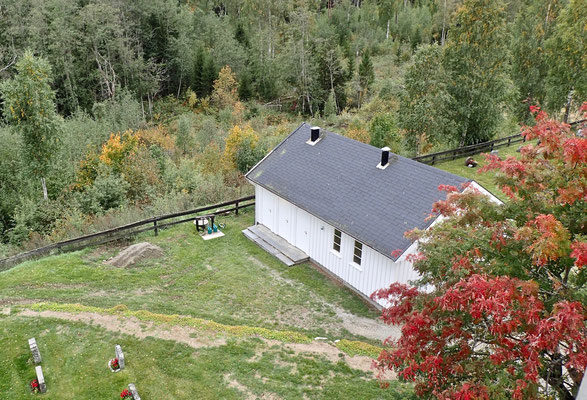 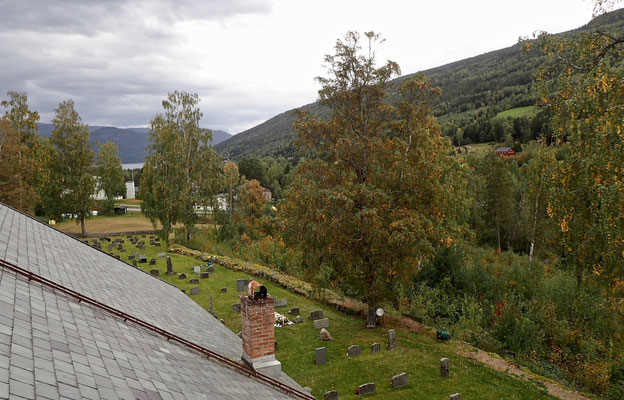 The church is surrounded by its cemetery and southwest of the church stands a building that used to be used to store the coffins until the burial. It should be mentioned in church history that Atrå was at the time the main mixture of the parish of Tinn and the pastor lived here. The rectory is located just above the church on the other side of the street. Today’s house, however, dates from the 1970s. In 1948, Rjukan was dissolved together with Dal by the parish of Tinn and has since become an independent parish with its own pastor. 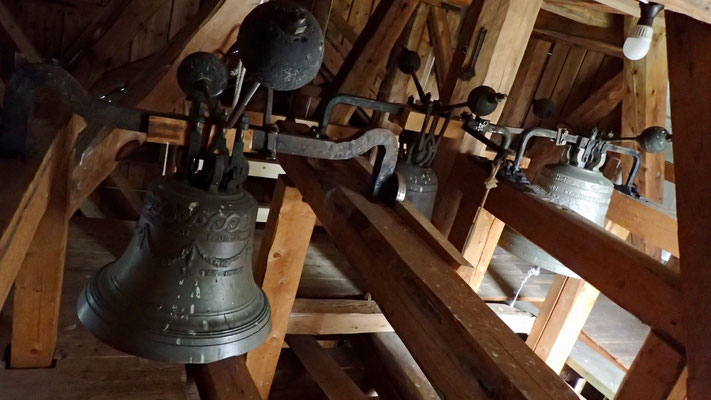 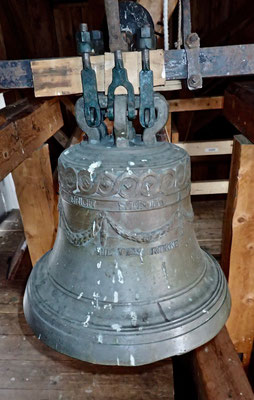 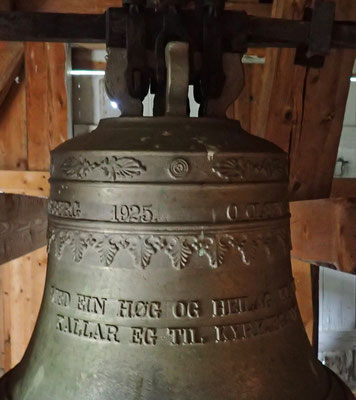 The church still has two of the bells from the old stave church. The youngest of the two is dated from 1802. It has a neoclassical decor, more defined than Louis-XVI what you can see by the garland encircling the bell and the border at the upper edge. The bell founder was probably Erik Schmidt, who also cast bells in Christiania (Oslo). About the older one of the two bells says Terje de Groot (whose specialty are medieval bells):

“It is about 55 cm high and has a diameter of about 47 cm. The bell-caster is unknown. A Latin cross is located on the body, which touches the upper round rod of the flapping ring. The bell is Romanesque. The bottom of the flapping ring, which is falling down, shows us that the bell is among the oldest in this category. At the same time, the shape of the crown indicates that it is not the elder among them. A dating to something 1200 is therefore probable. Due to the lack of inscriptions and decorations, more precise dating is difficult.

Originally there was a second bell of this kind, but it has disappeared.

In 1925 the church received a new large bell as a gift from the A/S Rjukanfoss. She has the following inscription: “With a loud and holy sound I call to the church hall”